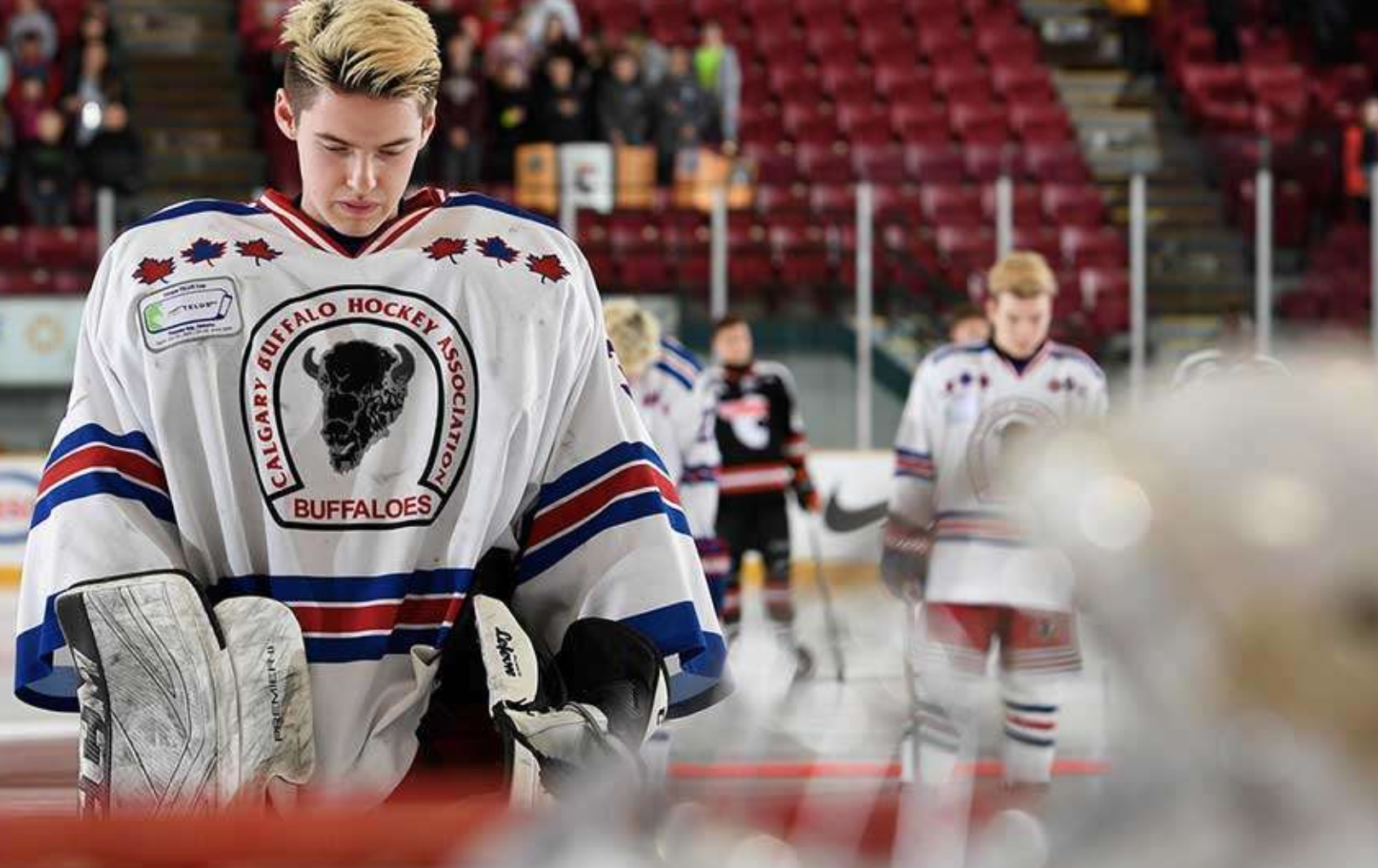 For Jonah Chambers, no other sport he’s played has been as challenging, both mentally and emotionally, as hockey

Chambers is one of two outstanding netminders with the Calgary Buffaloes, who are representing the Pacific Region at the 2019 TELUS Cup.

Playing alongside talented Garin Bjorklund, the 17-year-old Chambers had a 1.80 goals-against average and .925 save percentage in 15 regular-season games. He also played three games with the Alberta Junior Hockey League’s Calgary Canucks.

His coach, Brent Harrison is an on-ice performance coach at Skillz, Skating and Shooting Center in Calgary. He calls Chambers, “a great teammate, who has made the Buffaloes a very successful team this season.”

“He’s a really good kid,” said Harrison. “Most importantly he’s been a good teammate. We have two very good goalies and we decided, at playoff time that we’d go with our hot goalie, Garin. Jonah didn’t play a game in the playoffs and I think that was tough for him because when Garin left to play in the [World Under-17 Hockey Challenge], Jonah stepped in and carried us while Garin was gone.

“So, we rode the other guy throughout the playoffs, but Jonah was an outstanding teammate. He led the cheers for Garin and supported him every way he could. Jonah never complained and he handled the situation really well. You can’t have a successful team without people like Jonah on your roster.”

For Jonah, who grew up in Winnipeg, started playing goal at age nine because “I wasn’t a very good player,” and arrived in Calgary as a 13-year-old who knew virtually no one in his new hometown, being a part of this tremendous Buffaloes team has made it easy to be a supportive No. 2 netminder.

“I’ve found it’s really hard for a goaltender to be mentally tough all the time,” Chambers explained. “I like to go into every game thinking that I’m going to start. I always do my pre-game prep as if I’m going to play. Even as a back-up you have to be mentally prepared to play at all times.

“I also make it a point, as best I can, to keep it loose in the room. And in warm-up, when I get into the net and Garin is just skating around, I try my best to always challenge our shooters. I do my best to stop them in order to get their compete-level up. Goaltending is so much harder mentally than anything I’ve experienced in all the other sports I’ve played so I created my own pre-game routine that I have used for the past two or three years.

“It’s hard to be a backup. Everyone wants to play and I’m no different, but we have such a good team, Garin is such a strong goaltender and we have such a great room, that it’s easier for me to accept the fact that I might not play as much as I’d like.”

If Chambers sounds like a rather exceptional, caring 17-year-old, he is. And to him, the mental game is just as important away from the rink as it is on the ice.

“When I was at St. Matthews School in Grade 9, a counselor selected me and two classmates to attend a mental health conference,” he said. “I think he chose me because I was a hockey player and (former NHLer) Sheldon Kennedy would be there.

“A lot of the speakers there were excellent, but the speaker who really grabbed me was Sheldon Kennedy. The part that really took hold of me was when he was going through all that trouble at a high level of junior hockey and yet he couldn’t or didn’t speak up about it. Not being able to speak up is something that just got to me. MORE