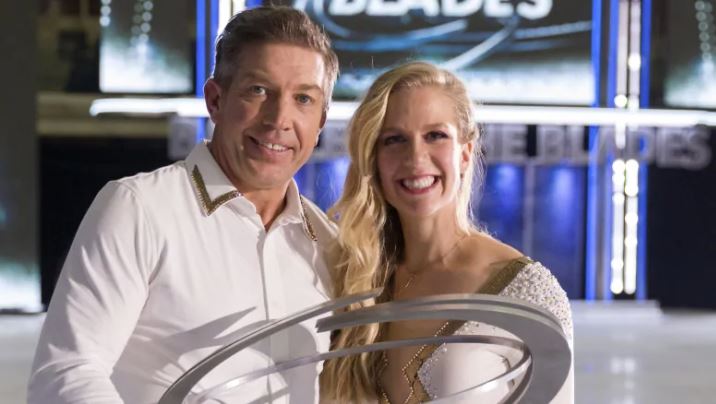 Ice dancer Kaitlyn Weaver and retired NHLer Sheldon Kennedy have triumphed as the winning pair of CBC-TV’s Battle of the Blades.

Weaver and Kennedy were revealed as the winners of the revived competition series on Thursday’s season 5 finale, which aired live from Ryerson University’s Mattamy Athletic Centre — historic site of the former Maple Leaf Gardens — in Toronto.

With their win, the duo has raised a total of $100,000 for their chosen charity: Canadian Tire Jumpstart, a national group that provides financial assistance to kids in need so they can access sports and physical activities.

“This is a surreal experience, I had no idea what to expect going in. I came here with an open heart and an open mind, and I leave so blessed to share this experience with Sheldon — all for an incredible cause,” Weaver said in a news release. “I feel changed, I feel like a better version of myself because of him, and I’m so grateful.”

The pair beat out Weaver’s longtime ice-dance partner Andrew Poje, who was teamed up with Team Canada women’s hockey star Natalie Spooner. Placing second, Poje and Spooner raised $17,500 for each of their chosen charities —Right to Play and Fast and Female, respectively.

“This was a journey; I remember the first day, Kaitlyn and I had a conversation about how we needed to show people hope, we needed to inspire people. If you’re in a dark place, you can come out of that, and that’s what I’m so grateful for,” Kennedy said in a news release.

“For a long time I never thought I could smile or do anything like this. We had to show people, and give them hope.”

Rounding out the finalists were Ekaterina Gordeeva and Bruno Gervais, who raised $15,000 each for the Heart and Stroke Foundation and the Gervais-Talbot Foundation, respectively.

Ahead of the series, Weaver and Kennedy had described their simple approach for the competition.

“Our strategy is as it is in life in general: take this one day at a time,” said Kennedy, who in his NHL career played for the Detroit Red Wings, the Boston Bruins and the Calgary Flames.

“Whether we’re figure skating or going to speak to a group of kids or going for a walk with our family, what are we going to do today to be the best we can?”

Kennedy is a spokesperson for victims of child abuse, after speaking out about his junior hockey coach, who was convicted of molesting Kennedy and other young players during the 1990s. Kennedy joined Battle of the Blades after a recent decision to take a step back from advocacy work to focus on his own well-being.

Accepting the challenge to become a Battle of the Blades competitor came “at a point in my life where I needed to have some fun,” he said.

“The reality is, we can have fun. There is a way out and this is about hope.”

For one of Weaver and Kennedy’s two performances on the penultimate episode, they skated to Elton John’s I’m Still Standing, which he called a personal anthem. The duo earned a standing ovation from the live audience.

“It kind of sums up not only Battle of the Blades but my own journey,” Kennedy said. “I’m still standing. A real survivor.”

The series, which showcases figure skating pros and hockey stars competing in pairs, returned to the CBC-TV lineup this fall — a decade after the show first debuted on the public broadcaster. It was put on hiatus in 2014 amid budget cuts.