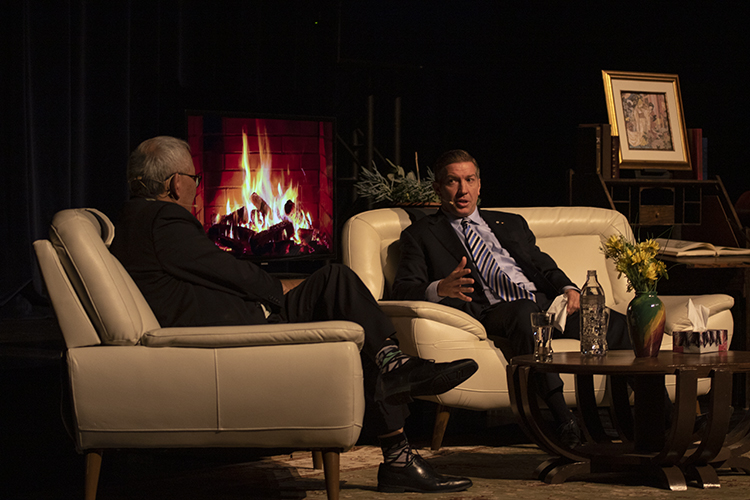 November 21st, 2019 Respect in the Workplace

Sheldon Kennedy stopped at Red Deer College this afternoon for a fireside-chat style to his vision to eliminate bullying, abuse, harassment, and discrimination.

Hosted by RDC President Dr. Peter Nunoda, the fireside-style discussion focused on Kennedy’s advocacy work with the Respect Group, as well as his own personal experiences with overcoming and addressing trauma.

Some of the themes of Kennedy’s discussion were around encouraging bystanders to act, to create a safe place for communication and to encourage people to practice talking about their issues so that changes can be made.

“A lot of times, it’s just people saying “You know, I’m feeling off today. I don’t know what’s going on” or “Hey, I heard a couple of comments, I saw your body language, it looks like you were really impacted by that” – those are the types of conversations I think are really important,” he said.

Kennedy’s overarching goal to inspire a culture of respect is foundational to the work of the Respect Group, and his message is applicable to all workplaces, schools and sports organizations.

The work done within the Respect Group is based on advocacy, education and encouraging people to be able to have difficult conversations before critical moments of crisis. He said it’s about creating a culture where, in our businesses, our schools, or communities, people are caring about each other and are empowering each other to take a stand when they feel something is wrong.

“They’re doing great work. I’m still quite involved in getting that work done, and getting that building here. I may not be as forefront and centre as I once was, but I’m still helping behind the scenes. I think that this community continually shows up, and I think that just makes sense,” he said.

The issues that Kennedy is alluding to include child abuse, sexual abuse, mental health and wellness, trauma and breaking the cycles and societal conditions that allow these issues to continue.

“Basically, the Central Alberta Child Advocacy Centre, what they’ve done is ask who are the organizations that have the legislative mandate to work in the space across our area, let’s bring them together and help them to get the best outcomes for kids – to me, it’s not rocket science.

He said having CACAC and the other agencies in our region working together is the best way to build better outcomes for children in the future. He said it comes down to leadership, and that he sees that in the work of local agencies.

“I think they’re doing a great job. I’m quite confident that the Centre of Excellence, the Child Advocacy Centre and the building will be built on the campus. I think there’s a need and there’s a will. We need the leadership and we need the data and the analytics to support the work around early intervention, prevention and integrated practice throughout the province of Alberta and across the country.”

Kennedy said he’s glad to continue to support the strong work of advocacy groups and organizations but is thankful he decided to take a bit of a step back. He said he’s focused on maintaining his health and well-being so that he can be a strong father, husband and person in his own life.